Reviewing: Receiver Of Many by Rachel Alexander

Overall rating: 4 Books out of 5

“Her name shall be Kore.”

“Zeus— the Fates— named her Persephone. Given her name, and who she is destined to become…” Demeter looked away from him.

“She is not to marry. And certainly not to someone as hard- hearted as you.”

I have loved Greek Mythology since I was a child and watched Hercules on repeat. I once gave a talk on it for my English GCSE (A*, go me) and, of course, I read the Percy Jackson books because they were one of the series my school library actually stocked. Now, revisiting Greek Mythology as an adult comes with its own set of questions that never occurred to me as a child/young teen. Such as:

I try not to think too much about the first question, and as the second might suggest, this book has quite a lot of sex in it. I mean it’s the Greek Gods, and 99% of the problems in Greek Mythology are a direct result of Zeus sleeping with someone who isn’t his wife so this should hardly come as a surprise but all the same don’t say I didn’t warn you. This book EARNED the erotica tag.

“Do you wish to return?” she asked again. “To a world where you know you are nothing as the crow knows it can fly? Where you were a caterpillar and could be a happy little caterpillar and would only be told that butterflies existed somewhere?”

Persephone thought about her poor mother, grieving in the world above, and the recent victims of the famine. She missed Demeter, in truth, but a great chasm stretched between her life as Kore and her place here as Persephone. There was no going back. She swallowed, her answer barely audible.

Receiver of Many explores Persephone as more than a helpless maiden dragged to the underworld and trapped there, and Hades (or Aidoneus) as more than the wicked King of the Dead who steals her away from the light. Her duality is explored in her identities as Kore, the maiden of flowers and as Persephone Queen of the Underworld. There are so many forces acting upon Persephone, from the complex interpersonal and political relationships between the Gods to the dangerous codependency fostered by her mother, that she is forced to change in order to survive. The consequences of her prophesied union with Aidoneus are far-reaching and catastrophic, and as the world turns to chaos above Persephone must deal with her own feelings regarding the Lord of the Dead and his role in her life.

Before she was even born, he’d beheaded Iapetos to save her. When he stood in Demeter’s home at the end of the war to remind her of their agreement and the infant Kore started crying, he had only wanted to comfort and protect her. He’d felt love for her swell in his chest, though he hadn’t known what had struck him so profoundly that day until now. Aidoneus had left his kingdom for the first time since that night to be gawked at by the Olympian gods in order to ask for her.

The relationship between Hades and Persephone is bound to be an odd one – for one, he’s technically her dad’s brother (and maybe also her mother’s brother? I really don’t want to think too hard about how Greek God Genetics work) – and in Receiver of Many he has also known he’s going to marry her since she was conceived. Yeah he literally saw a baby and knew he was going to marry her one day, which is mildly disturbing and also makes him thousands and thousands of years older than her, but Gods are immortal so that bit I can forgive. I did love Aidon’s adoration of her, his (very ungodlike) faithfulness to the woman who would one day be his bride even before they were wed, and his acceptance of Persephone’s role in the kingdom of the dead not as his consort but as his equal – perhaps, even, as his superior. As you might expect with Hades and Persephone there are a few instances where consent is in question, and there are a few scenes (not including Hades and Persephone) that contain outright sexual assault. It isn’t too graphic, but I know this can be a hard NOPE for some readers so I thought I’d let you know! Overall though, there is a lot of enthusiastic consent involved which is FAB. An example:

“If you want me to stop at any time—” She put two fingers to his lips. He kissed them, then turned to capture her lips again in a kiss. He cradled her shoulders and held her up to him as her knees shook in nervousness and delight.

Overall I thought this was a wonderful retelling of one of my favourite myths, with enough intrigue and action that it wasn’t just SOLIDLY PORN (I mean, there was a lot of it, and it was well written, but there were breaks for Godly drama in the world above). The focus on Kore/Persephone’s virginity was a bit uncomfortable for me – the idea of your entire family discussing whether or not you’ve been deflowered is a tad mortifying for most I imagine – especially since her name growing up literally MEANS MAIDEN but there is a great scene where Hecate (who is great) says the following:

“You are maiden no more.” Hecate grinned. “But a broken maidenhead does not a woman make.”

Overall I really enjoyed this book, and will definitely be reading the rest of the series. I thought it was a great new take on an old story, and I’d recommend it to any Greek mythology fans who aren’t shy of smut! 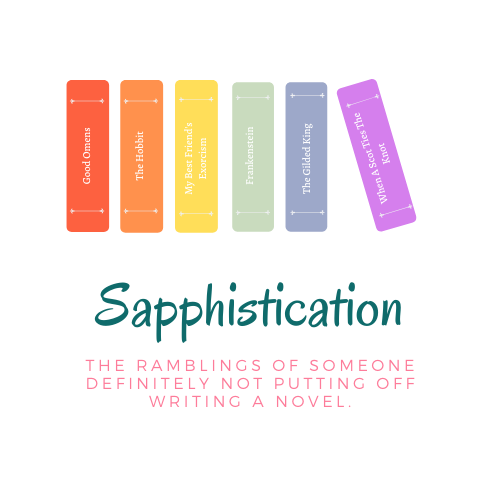 Follow Sapphistication on WordPress.com
Join 952 other followers
Curling up with a book and a cup of tea tonight! It’s freezing out there! #bookstagram #amreading #houseofgucci
We read it for book club and none of us liked it. Find out why at https://sapphistication.wordpress.com/2021/07/27/reviewing-the-subtle-art-of-not-giving-a-fck-by-mark-manson-narrated-by-roger-wayne/ #thesubtleartofnotgivingafuck #bookreview #bookstagram #bookblog #markmanson #rogerwayne
We all know the name Jack The Ripper, but what about the lives he destroyed to become the mystery that lasted beyond any of their names? Hallie Rubenhold brings life to the Five in this astonishing book, find my review of #TheFive at https://sapphistication.wordpress.com/2021/08/31/reviewing-the-five-the-untold-lives-of-the-women-killed-by-jack-the-ripper-by-hallie-rubenhold-read-by-louise-brealey/ #HallieRubenhold #LouiseBrealey #bookstagram #bookreview #nonfiction #bookblog